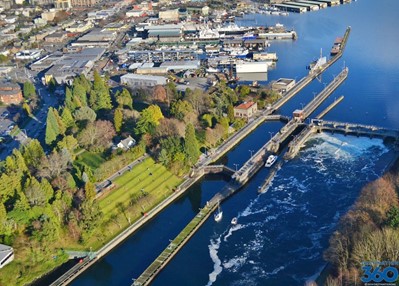 With its growing list of successfully completed projects and two new sole source awards, Tribal One businesses have become the ‘go-to’ firms for U.S. Army Corps of Engineers (USACE) technology upgrades in the Pacific Northwest.

A sole source award to T1 Construction, LLC, by the USACE Seattle District will address security at the Lake Washington Ship Canal. Meanwhile, the USACE Portland District turned to Tribal One Technology, LLC, Tribal One’s newest SBA 8(a) participant, to upgrade services at their district headquarters.

“With our construction and technology companies actively participating in the 8(a) program, Tribal One offers a considerable range of sole source options for the Army Corps of Engineers throughout the Northwestern and South Pacific Divisions,” said Brady Scott, Tribal One Development general manager. “These options have value only because our team members have demonstrated that they can get the job done on time, on budget and meeting or exceeding the Army Corps’ high standards. We continually seek to earn our reputation as a reliable partner for sole source opportunities.”

In the Seattle District, Tribal One will help ensure security at the Ship Canal by upgrading software and hardware and configuring the physical access security system. The work will bring the facilities security system up to current Federal Information Processing Standards (FIPS 201 V2). Security Install Solutions of Aurora, Colorado will team with Tribal One on the project.

For the Portland District, Tribal One will install video teleconference services and upgrade audio-visual systems in the Summit Conference Room of the district headquarters. The project is the first sole source award for Tribal One Technology since it entered the SBA 8(a) Business Development Program in June.

IES Communications, with operations in Tualatin and Hermiston, Oregon as well as Denver, Colorado, will team with Tribal One on the project.