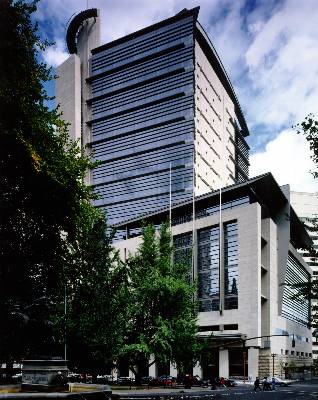 Tribal One will upgrade nine elevators in the 16-story Hatfield Federal Courthouse in Portland, Oregon under a $6.8 million sole source award by the General Services Administration.

T1 Construction, LLC will team with RJS Construction, a local woman and Native American owned small business, to replace all nine elevators and to upgrade the electrical systems and the fire alarm and fire protections systems to increase safety at each elevator shaft and mechanical room.

According to Tribal One Construction Executive Erik Sell, this is not the first time the company has worked on courthouse elevators.

“Our Tribal One team was selected for this sole source award as a result of our successful upgrade of six elevators in the historic Byron White Federal Courthouse in Denver,” Sell said. “Joining with the team at RJS Construction, who have knowledge of the local construction environment and the Hatfield Courthouse, also played an important role in this award.”

Sell noted that the GSA incorporated Tribal One’s Value Engineering proposal into the final solicitation. That proposal decreased the expected maintenance required by the new system and increased its projected lifespan all while staying within the budget.

“Our biggest challenge will be completing the work while the Federal District Court remains active,” Sell said. “Our team is putting a great deal of effort into designing and installing sound mitigation systems around each of the 99 elevator doors to eliminate the noise for workers and court proceedings and to maintain public safety.”

Tribal One also will work with a local crane company to remove the old mechanisms from the 16th floor and lift new elevator machines onto the roof. The project is expected to take about 17 months to complete.

previousTribal One to support The Great American Outdoors